HomeBlogAn Outside Inny, Inside Outy Masters

An Outside Inny, Inside Outy Masters 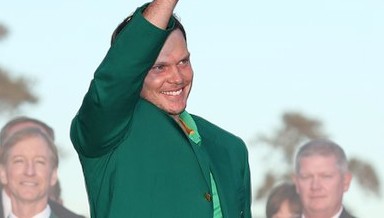 Well, for me it was a revealing, entertaining and exciting 2016 Masters.

Because it had everything that I enjoy in a good rip roaring human story.

This was followed by a realisation that I could turn the sound down on the telly and listen to the radio commentary. “Maybe my life is survivable after all. It’ll take time but I should be ok – if I work really hard at it.”

And ultimately, “Glory be. Praise de Lawd. Ken and Peter are on BBC2. Salvation! Hallelujah! This makes me happy!”

A complete load of old tosh before the golf had even begun and I played the whole thing out in my Outside In head. For goodness sake – I’m supposed to know better than that.

But that’s the great thing about being human. That’s what we do. We make the the daft mistake of thinking that the stuff ‘out there’ is responsible for what’s going on ‘in here’.

Whew. Glad I finally understood that. Just as well as the BBC made me happy then isn’t it? Oh wait. No that’s not right either is it? Nope. Same thing. Same old same old.

All that drama going on in between the ears but nowhere else. The ‘nowhere else’ bit couldn’t give two hoots.

And then it started. Yer Man Spieth led after wonderful first round of 66 and then the wind got up. The greens dried out. The circumstances became unfair. An amateur was going to win for the first time in history. Poults tried his best and then beat himself up. Ernie had a couple of minutes that sympathetic journalists will ask him about for years to come. Tom Watson hung up his Masters boots and ‘made’ me sniffle. He’s one of my heroes is Tom. What a man,

The Spieth was magnificent. Twenty-two years of age and attempting back to back Masters wins.

Mind you he was slow. “Slap the penalties on. That speed of play makes my blood boil!” was heard but I whispered to the utterer of the utterance, “no it doesn’t.”

“Yes it does and so do you, you repetitive pillock. Get a life!”

Berhard Langer is 13,118 days older than Jordan Spieth but the old fella used his skill and wisdom to perform at a phenomenal level.

Jason Day hit the ball over three million yards and so did Dustin Johnson. If Dustin had Jordan putting for him he’d have won it by a dozen shots but he didn’t so he did what he’s done before.

King Louie played billiards on the 16th and scored a magnificent ace that his kids will be forced to watch thousands of times – and quite right too.

But for all that there were three things that were big. The Spieth, The Willet and Westwood.

Let’s start with Lee. He’s had a lot of stuff going on in his life over the last year and has only recently settled into a new abode. I have to declare my interest and state that not only am I a big Westwood fan but I’ve had the pleasure of working with him. When Lee is on form he’s wonderfully quiet. When he settles in over the ball there’s no tension, no noise, no spikes on the signal path between brain and muscle. It’s beautiful to watch.

He was getting very close to this at Augusta this year and I suspect that, if he rekindles his Inside Out awareness (he knows what it is), he’ll create many chances at glory this season.

And then there was Hole 12. You saw it. I saw it. The world saw it. A quick google of “Jordan meltdown” yields these results today:

USA Today: Where does he go after epic Masters meltdown?

The answers to these questions are:

Why such short glib answers?

Because the questions don’t exist for him or have any relevance unless Jordan asks them of himself. And is there a need to ask these of himself?

If he’s a bit Outside In just now then good on him for being human. But I suspect that very soon that Wise Inner Voice of his will make itself heard above the din of trolls and advisors and remind him that he’s just fine. He’s grounded. He knows how it works. And he’ll win plenty of big ones. He doesn’t need the “I’ll be happy when…”

What a wonderful, strong, brave and wise performance.

A 67 and no bogies in the final round. Magnificent.

Danny looked so quiet and unruffled and, when he reset himself at 18 following the interruption, became Champion. I don’t know Danny. Never met him. But I do know I tipped him to win earlier in the week and didn’t put a bet on him. Honest.

Chubby told me a month or so back he thought Danny was at the edge of something happening and now two wonderful things have: Parenthood and a Major championship. Chub mentioned his family and his grounding and the solid infrastructure he has  that allows him to be himself – what wonderful things to have in your life.

Even better is the brotherly support offered on twitter by his brother Pete (@P_J_Willet) – you must have a look!

But when it comes down to it there’s only one person to make the shots, hole the putts and put their signature on the card. And the guy that did that best was Danny Willett.

His win made me really, really happy.